Albert and friends rescuing a sea turtle after Hurricane Isaias waves stranded the turtle over a berm of dead coral. The coral was washed onshore by hurricanes. The beach in near Ponce.

Focusing on Smaller Camps & Personal Needs of the People

The Camp Manager at the first camp, where we installed a 200-gallon tank, said it was difficult disposing of sanitation pads. Since the washable pads we handed out in our Neonatal Workshops in Nepal were so popular, we thought about making a few for the women in the camp. It proved to be very time intensive sewing all the pieces by hand. Next trip we’ll bring finished samples and patterns for each camp. Hopefully, washable pads will be distributed to more women, especially during disasters.

Gail cutting out the outter pads.

Albert, Linda and Maritza discussing the camps in Guayanilla. The 200-gallon tank Albert and Ceszar installed at her camp. They put it up on 3 pallets.

This is a column Miguel is building. Rebar horizontal ties are placed every 18 inches. These are the most stable columns that would be able to withstand earthquakes.

Another carpenter joins our filter team. Miguel (left) is the owner of the Ponce Mini-Studio where I’m staying, with full electricity, AC, internet, and Rafael’s delicious egg and cheese omelette. An added bonus is Miguel’s botanical touch everywhere. I feel like I’m in the garden of Eden– lush tropical flowers, birds of paradise, orchids, and palm trees fill very empty space on both floors. Miguel voluteered to drill buckets since we now have our full supply from the Bayamon Home Depot. After the buckets are drilled they travel to Albert’s mountain home for assesmbly and distribution. 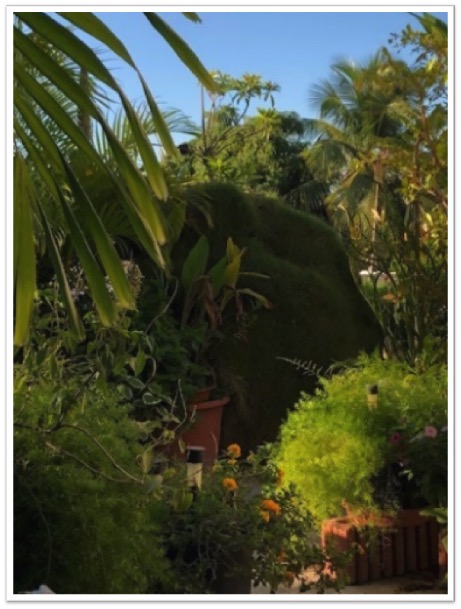 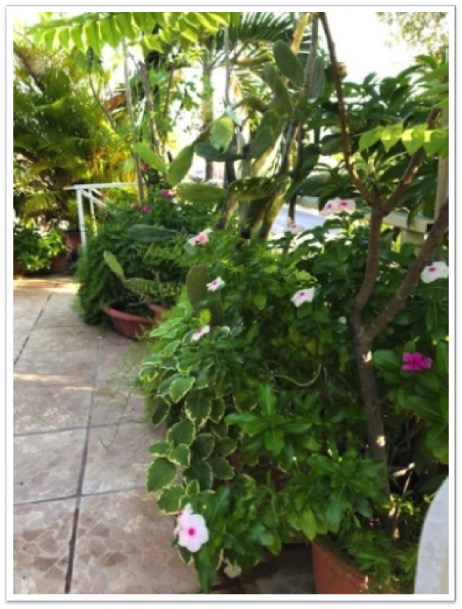 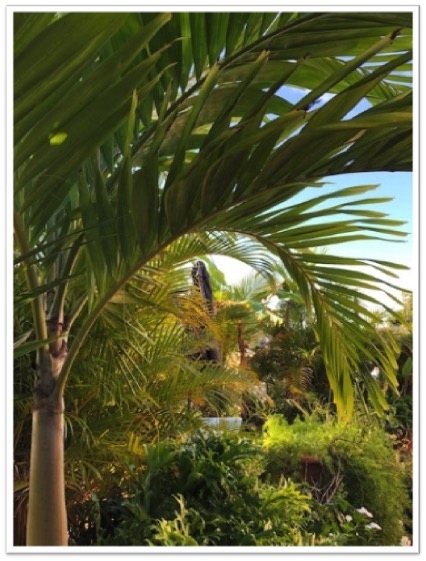 On Sunday I met Anthony and his family at the Guayanilla McDonalds. Our plan was to visit the small refugee camps that formed in the mountains north of Guayanilla. I brought a few filters, but planned to distribute more after the survey. A friend of Anthony's, Paco, spotted him in the parking lot and asked what we were doing. Anthony shared about the filters and helping with safe water in the small camps. Paco was so excited, as were the two men with him from the Caguas Coop. They’re the men in blue shirts in photo below. Right away they asked if they could take a filter back with them to make 20 for the community and return the original filter to Guayanilla. This trip they were in Guayanilla transporting a special bed for an elderly invalid woman and other items for her family. Paco is a first responder and EMT for Guayanilla, like Anthony, he knows everyone in the district.

Paco and the Caguas Coop men. The woman holding the filter is an elementary school college teacher. The woman in yellow took a filter to her remote home.

Guayanilla is a large district, originating in the south at the coast and ends after a 2 hour drive north in the mountains. We spent the rest of day visiting small camps and picking up water taps and other parts from a local hardware store. Then Anthony and his boys fixed filter taps.

Below: Left–Paco and his two boys. Middle– Anthony and Dianna his wife sawing parts for taps. Right–The boys helping screw on parts and line up taps. 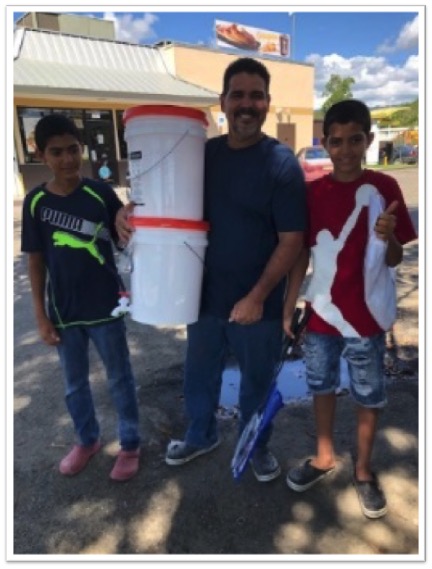 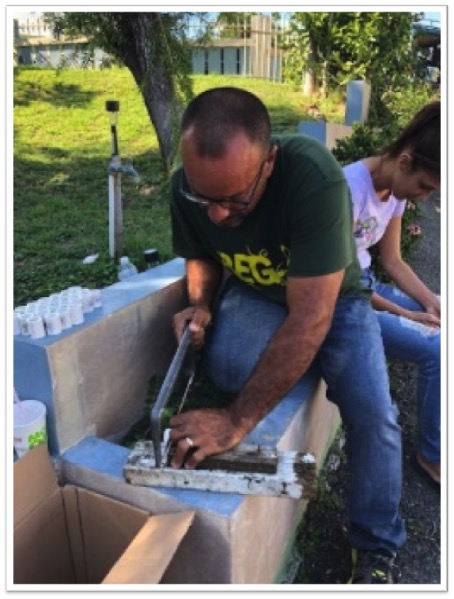 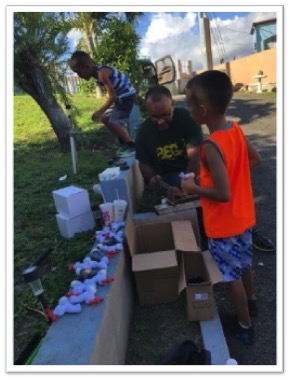 Below: Anthony’s tent and shower at his father-in-law's. They’ve been there a month through rainy nights and days, shaken by many of the 2,028 aftershocks.

Below: Not far from Anthony’s tent is a collapsed home, whose heavy cement roof tiles would have stood up to any hurricane, but unfortunately not an earthquake.

Below: Anthony talking with a man and his horse. His family set up a camp near a busy intersection (Right). The two large blue barrels in the back of his truck hold water for the horse and family. We returned the next day with a filter. 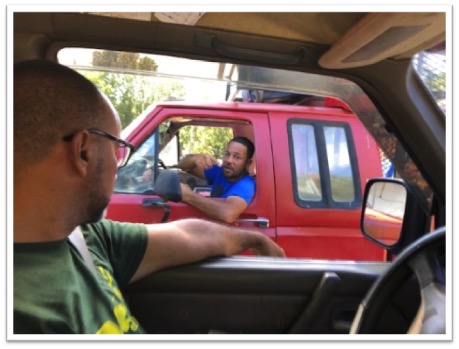 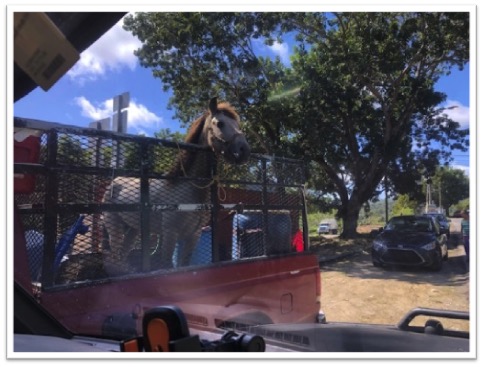 Right – Ortiz, retired Navy, is caring for his mother, a seven-year stroke survivor. He asked for another filter to provide safe water to his pastor who is undergoing dialysis.

Our trips to these small camps continue to emphasize the commitment among family members and neighbors to provide care to their ailing and elderly, albeit complicated by the trials of living through the emotional stress of daily earthquakes.

We stopped at family, neighborhood, church and community camps to check their needs. In community camps women feared walking to the toilet in pitch black. They gently requested solar spotlights and whistles. We also donated personal headlamps.

I’ve enjoyed returning to camps and just chatting with people. While talking to Wendy and Rosemary, a man drove up with a car full of Spanish word games to pass out, from a magazine publication his wife puts together every month. The thoughtful gifts will help pass the time especially in these rainy days.

I took a video of Anthony explaining filter maintenance in Spanish near Macaná, Guayanilla (will try to have in a blog post soon). It was taken at the camp near the mountain border between Guayanilla and Guinica, the areas most damaged from the earthquakes.

Above: There are 3 families living together.

Below is Lucy– she and her retired Army husband live at the end of this mountain filter distribution. Traveling downhill, we were reminded of the imminent dangers living in an active earthquake zone, by the huge boulder that tumbled down the hillside during the M5.0 on Feb. 4th. The total damage from these quakes won’t be known for months, if not years, as long as the earth continues to jolt this island.

Wilma is living with her father since the second level of her home is cracked. There are three adults and four children. Her father is in the wheel chair.

The next stop was at a community sport field where four tents were put up in the open field. Twenty people are here, plus a young man with a wheel chair. We donated two filters plus another to the Pentecostal Christ Disciples Church, where about

8-10 people are staying. Photos: Left and Center: Sports field Member of church picking up a filter. 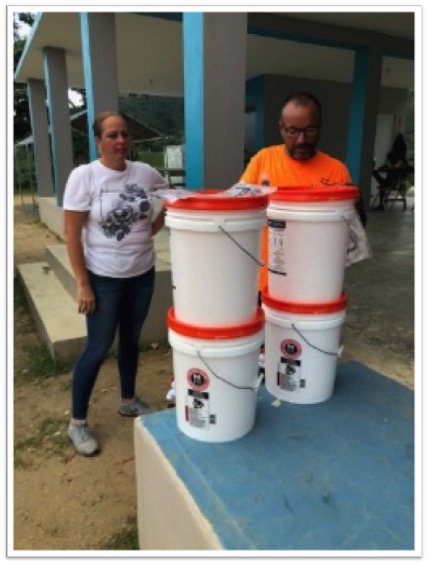 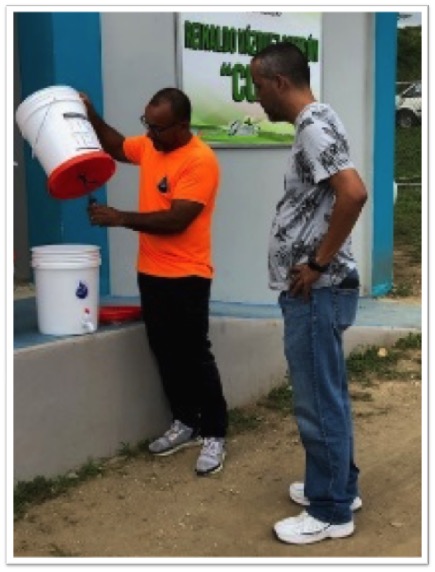 Camp Sepulveda has 15-20 people staying here (5 families), two elders are also living in tents. A few days ago, a strong wind blew down the tents so they constructed a wooden wall for protection. Juan, 14 years old, and Gabrilla, 18, have been out of school for a month. This coming week, Juan, who attends a private school, will rejoin his classmates in attending classes under a canopy near the school building. Gabrilla, who is in her senior year, will attend classes in two weeks. Her mother lobbied to hold classes outside the cement building – not inside. The school is near the cathedral, which collapsed in the town square. 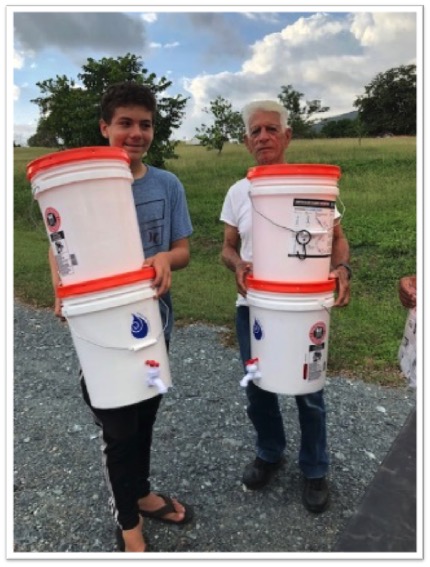 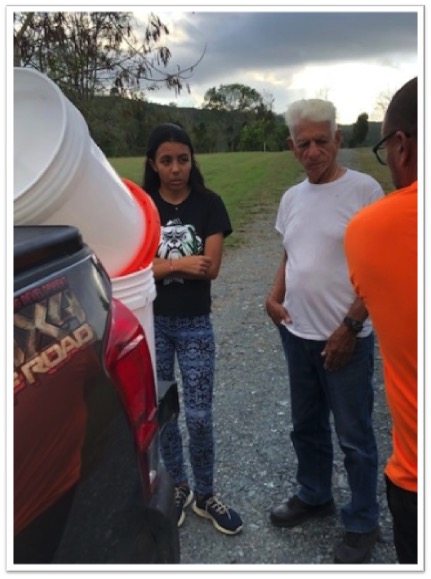 Below is the home of Max, who is working at the local hardware store, and owned a restaurant in the Fero area, which is closed now. Over the last several days, more relatives and friends have moved into tents on the property, when their city apartment building was evacuated. Now 22 people live here with possibly more to come. The hardware store owner gave us a 22% discount on taps and parts when we went in for more supplies. 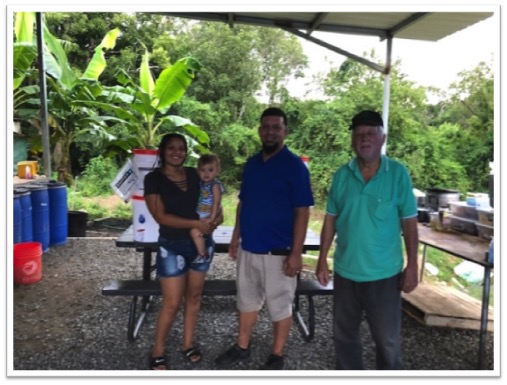 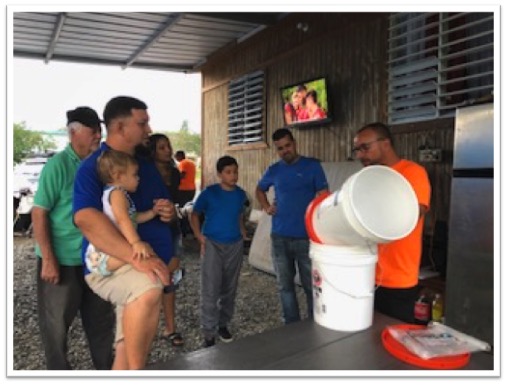 Albert and Anthony are still smiling–

they have been such dedicated volunteers: making buckets, giving instructions to the communities and finding camps in out-of-the-way places. Later that evening, I drove to Fero with Anthony and his family to see their old house. Water has receded, but a new shoreline has formed just feet from their home. Sand continues to bubble up in their yard along new cracks in the earth. He said, sadly, as we parted, "I just want to go home." 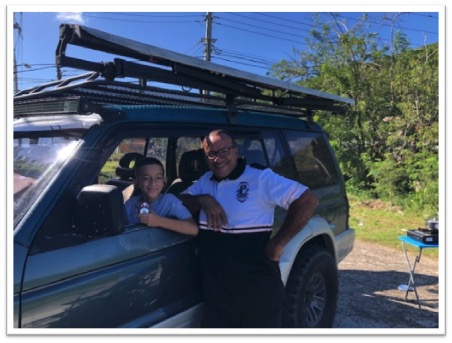 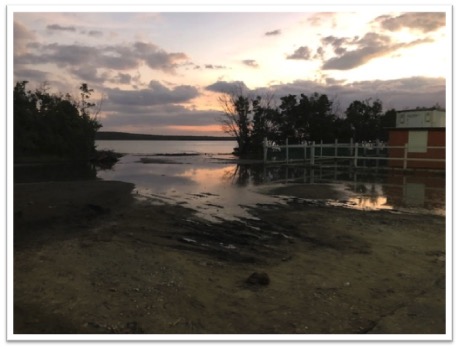 Looking at more camps, addressing the need for individual filters, and concerns over disabilities.

Aftershocks and other complications led to these posts going missing, hoping to recover them at a later date. These days were spent inspecting Guanica, Yauca and Guayanilla, installing small filters and making plans for future filter installs,

This morning we met with Maritza at the Art Museum in Guayanilla to discuss the situation in two camps – one of about 100-200 (varies) people who lived in Faro Viedum Playa Barrio near the sea and another of about 60 people who are camped out in Marite’s back yard. They’ve gathered from multiple areas in Guayanilla. The first camp, called the Faro Camp, was established in the foothills at the end of the road in a new housing development. The refugee community cannot return. The ground beneath their homes has subsided, flooding the area already suffering structural damage.

This area is where Anthony lived. We’ll be meeting him on Sunday to travel to small camps in the mountains.

A group of engineers are helping to design a new community, but this will take months. Unfortunately, there are several young adults with severe handicaps: one with hydrocephalus, three with palsy, another with bone deformations, and a young woman suffering from emotional stress and living in the forest outside the camp with her husband. Marite has a few psychologists and therapists who are helping the community deal with the stress. Albert brought smaller filters to distribute since they have a water source that is non-potable. We’re also providing a solar nightlight and fly traps. A group of Veterans passed out tents, air mattresses, cots, cook stoves and other supplies. 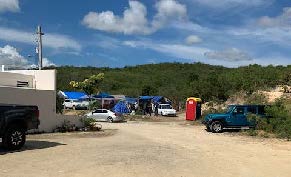 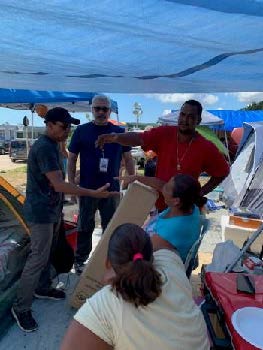 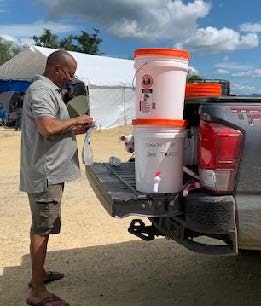 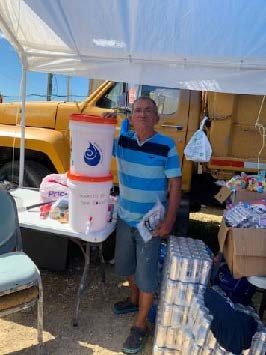 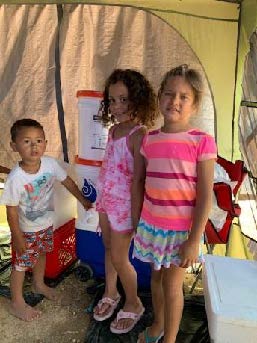 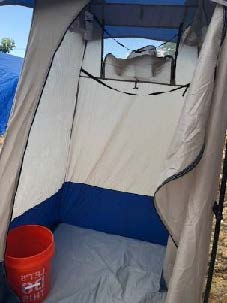 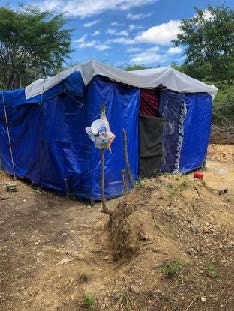 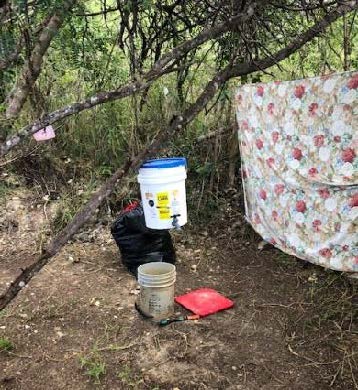 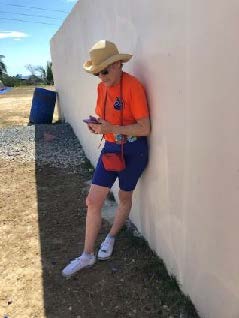 Left: A construction company donated their onsite project shed with air conditioning for one of the severely handicap young adults.

Below: Camp in Marite's Back Yard, Guayanilla Supporting 60 refugees. Marite’s sister and brother-in-law, her sister is receiving care for pelvic cancer. The visit reinforced the need for Individual filters for those whose health is compromised. Albert is building a 200-gallon tank for the camp. 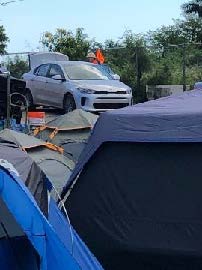 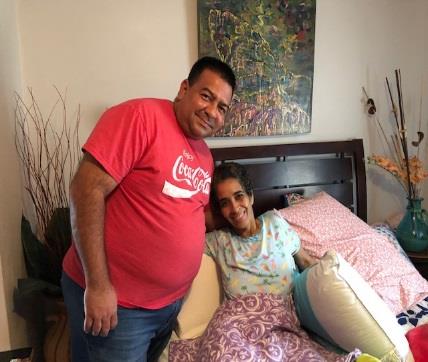 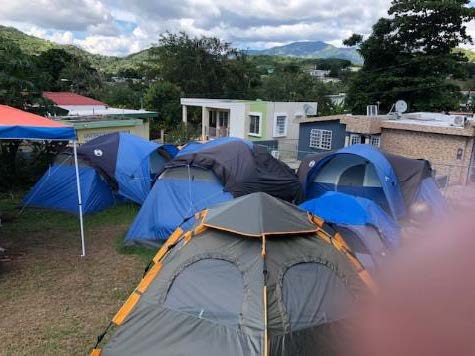